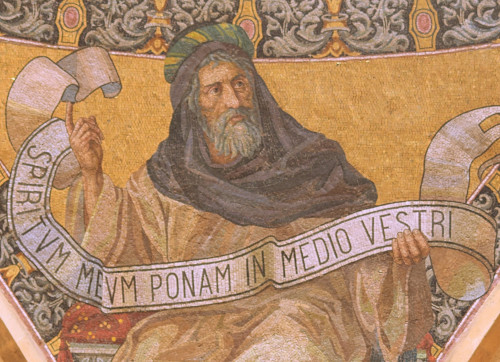 Today’s first reading is from the prophet Ezekiel. The reading talks about his vocation to be a prophet. Ezekiel was in Babylon when he received the call from Yahweh. He was around 30 years of age. His ministry and writing cover the historic time from 593 B.C. to 571 B.C., probably the darkest period of Jewish history.

The destruction of Jerusalem and the deportation of captives to Babylon took place in three stages.

In this most difficult situation, God calls Ezekiel to be His prophet. God Calls him “Son of Man”, the title Jesus later adopts to identify himself. This title reminds Ezekiel that on his own, he is powerless – a simple mortal, who must depend on God for everything. Now Ezekiel has a special task to perform. His job proceeds out of his title – he has been called to be a mouthpiece of God.

As a prophet, Ezekiel must represent God.  Now more than before, he should listen to God in prayer with great attention; and communicate verbatim what he has heard in the depths of his heart to his countrymen. He should not add to God’s message or subtract any inconveniences. His job is to communicate faithfully the Divine word. By this, all will know that there is a prophet of Yahweh in Babylon.

Every baptized person is called to be a prophet. We all must announce the divine Word to our brothers and sisters through our words and actions. We should communicate it with utmost loyalty to our children at home and our colleagues at work. We have the task of communicating God’s true message to all our listeners – courageously without any compromise – even if they feel uneasy with God’s message.

Listening in silence and prayer to the Voice of God, in the innermost recesses of our heart, is the primary duty of every prophet, and therefore, of every Christian. Let us be true Christians.