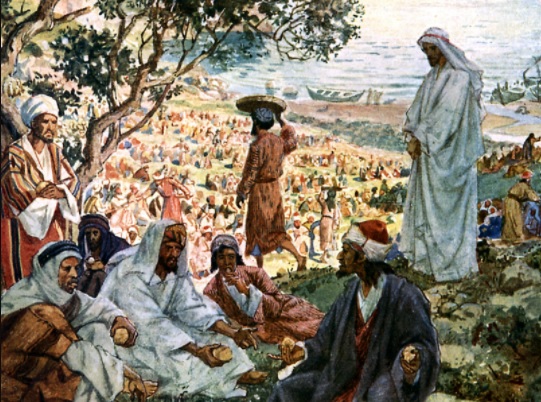 “When Jesus realized that they were about to come and take him by force to make him king,
he withdrew again to the mountain by himself.” (Jn 6:15).

If we do not understand who Christ is, then we have a risk of making Him a king fitting to our own culture. When the crowd realized that Jesus was not willing to act according to their selfish wishes and not ready to provide them the satisfactions they were seeking, they were ready to turn against Him and demand His crucifixion. A ‘superstar’ Jesus, in our culture of celebrity worship, could be a counter witness to the real faith proclaimed in the scriptures.

In his Gospel, John narrates seven of Jesus’ miracles calling them signs. Signs always have one specific meaning – they direct us to something or someone. Today’s miracle, the multiplication of the loaves, is Jesus’ fourth sign. Since it stands in the middle of seven signs, according to the literary technique (chiastic) used in the scripture, it carries a greater importance. “The miracle, rightly understood, will point us to the Messiah and not a prophet, to a heavenly king and not a kingdom on earth”.

John introduces the miracle of the multiplication of the loaves in connection with the Jewish feast of the Passover meal. He wants his readers to read it in the light of the great Jewish Passover, which celebrated the liberation that brought them out of Egyptian slavery. Just like in the Passover meal, Jesus sat down in the middle of five thousand people, He took the bread, gave thanks to God and distributed it to the people. This action of Jesus will repeat again at the Last Supper when Jesus celebrates His last Passover meal on earth. But at the Last Supper, Jesus will identify the bread as His own Self.

This miracle, therefore, is a sign which will lead to Jesus, who brings liberation to people and who will become our true bread from God.