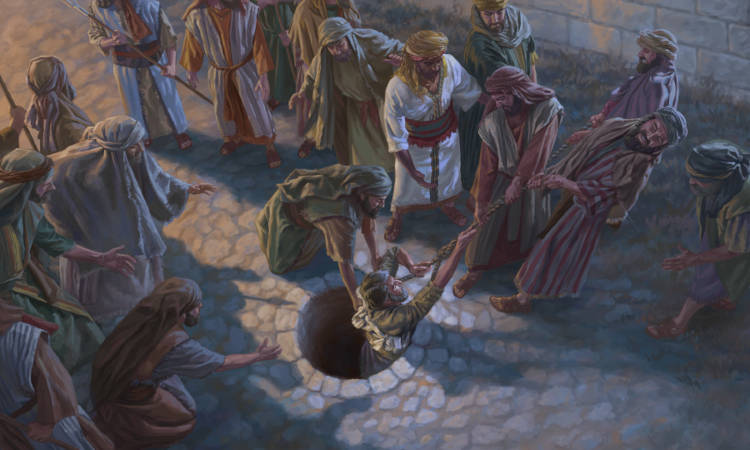 Taking a Stand for Christ

Today’s Psalm is a cry for help and an expression of pure joy for being delivered by God. This joy is an outcome of putting one’s total trust in God. The psalmist knew deep down in his heart that despite his pain and suffering, God would rescue him. God was his Joy!

The second sentence of this psalm seems to fit well with the life of prophet Jeremiah, “He drew me from the deadly pit, from the miry clay” (Ps. 40:2). Prophet Jeremiah felt that he had been abandoned by all for doing the work of God. At that moment of his life, God was Jeremiah’s only help. Like the psalmist, he lamented and cried to God for consolation and support, “Out of the depths I cry to you O! Lord: Lord, hear my voice” (Ps. 130).

In the year 587 BC, when Jerusalem was surrounded by the mighty army of Nebuchadnezzar, Jeremiah urged the weak King Zedekiah to surrender to the Babylonians. King Zedekiah failed to make the right decisions, for he listened to the counsels of wicked people and disregarded the warnings of God sent through the prophets. Ultimately, the king had only one option open to save his people and his country – to surrender to the Babylonians and then to come before God in repentance, asking for mercy.

The commanders of the army who controlled the affairs of the country saw Jeremiah as a threat to their plans. They accused Jeremiah of causing division among the people and disheartening the spirit of the remaining soldiers. Succumbing to the pressures of the army chiefs, King Zedekiah allowed them to imprison Jeremiah by putting him in a muddy well.

Jeremiah felt totally defeated and abandoned. None of his compatriots were ready to help him. A foreigner, an Ethiopian named Ebed-Melech rescued him. A stranger saw the injustice done to the prophet and confronted the king, “My lord, these men have done a wicked thing…” (Jer. 38:9).

What happened to Jeremiah happens even today. Those who proclaim the Gospel of Christ and stand against the evils in the world will be treated in the same way. In the present day’s ‘cancel culture,’ they will be isolated, threatened, persecuted, imprisoned, and even ‘deleted’.  But as Jeremiah did, we must learn to wait on the Lord. “I waited and waited for the Lord; He turned to me and heard my cry” (Ps. 40:1).

Today’s scripture invites us all to take a stand for Christ. That means taking a stand for life, truth, and justice. The disciples of Christ will be hated in this world for their stand. They will be regarded as troublemakers, haters of humanity, destroyers of world peace, and human liberty. But the true peace of Christ comes with a cost. The peace of Christ means inner harmony, which comes by loving God and seeking the salvation of our neighbours.