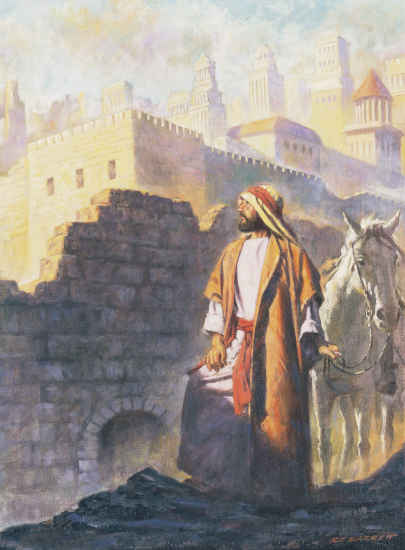 After the defeat of Babylon by the Persians (539 B.C.), the Jewish people began their return from exile in Babylonian captivity. Around 444 B.C. Nehemiah was appointed by King Artaxerxes as a governor of Judah. Nehemiah took upon himself the rebuilding of the wall at Jerusalem and the restoration of Jewish faith and religion. He was assisted in this task by Ezra, a priest and a very dynamic leader.

In the first reading, Ezra was sent to Jerusalem to find a solution to a chaotic situation created by some Jews living there and the recently returned Babylonian exiles. “God’s chosen people” had forgotten the precepts of their God. The poor were exploited. Stealing, violence and debauchery had become a common trend in their daily life.

Ezra was fully aware of the power of God’s Word – which indeed can change and transform human life. Ezra undertook the task of teaching the people God’s Word – the law and the prophets. He realized that “chosen people” took to wicked practices not out of disrespect or failure to observe the Lord’s commands but out of sheer ignorance of His precepts and commandments. The people had totally forgotten their scripture.

In the gospels, Jesus completes the work of Ezra. Jesus does not use any words of scripture to accomplish His mission because He is the Word of God. When He speaks, God speaks. His every word has the power to bring order out of every kind of chaos. We only need to accept Him like the people did in the first reading – they accepted and believed in the scripture read to them by Ezra.

Ignorance of Christ and a lack of understanding of His teaching are still prominent causes of the existing chaos in our society today. It is a challenge for all of us Christians, to accept Christ first and then to give Him to the society where we live and work.