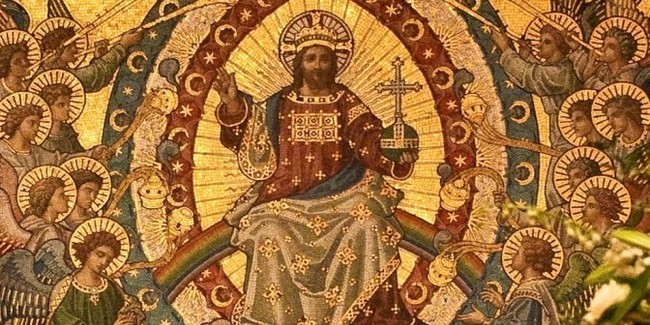 “Are you the King” – Pilate’s question resounds aloud as we celebrate the feast of Christ the King this weekend. In the presence of Pilate, Jesus looks anything but a king. He is chained, flogged, and crowned with thorns. They bow to him in mockery calling Him, ‘the king of the Jews’, without their knowing, in a typical Johannine irony, they speak eternal truth. Is Jesus really the king of our life? Our fidelity and allegiance to Him will answer the question for us.

In the Lord’s prayer, we pray to God, “Thy kingdom come”, asking Him to establish His reign over us. A kingdom is fully established only if the subjects obey the will of its king. God sent His son to this world as our Lord and King. When we accept the Son’s will and respect Him, then God’s reign starts in our lives. Jesus promises that the kingdom of God is among us, provided we are ready to do God’s holy will.

In this world Jesus’ throne was the cross – a punishment for capital offences and therefore a sign of shame. His life was an utter failure for those who seek authority, power and prestige. The cross and a failed life for Jesus is a perfect symbol of God’s love to humanity – “For God so loved the world that He gave His one and only Son, that whoever believes in Him shall not perish but have eternal life” (John 3:16).

As an exhibition of this earthly power, Pontius Pilate, the Roman governor for Judea, introduces a bruised and humiliated Jesus to the crowd saying, ‘Ecce Homo”, which means, “Here is the Man (human being)”. Again, we see the artistry of Johannine irony which brings out the beauty of the deepest of reality. In its most vulnerable situation ‘a man’ understands perfectly the true nature of humanness with all its limitations and such a man totally recognizes the value of God’s kingdom.

Unless we walk along with our Lord and try to live in the spirit of the Gospel – doing God’s will in every walk of our lives – we are not yet in the kingdom of God.