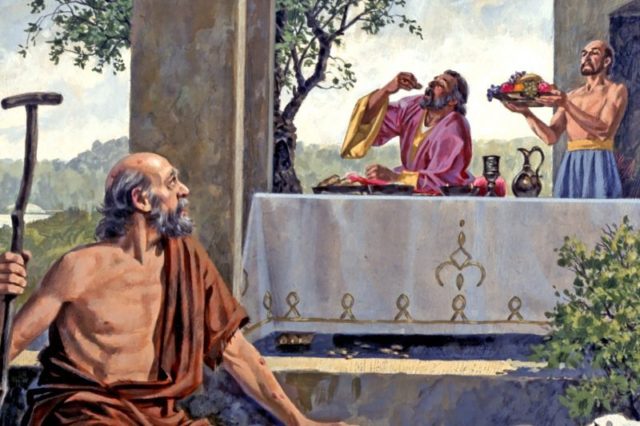 Today’s parable is addressed to the Pharisees, who ‘loved money’ (Lk 16:4).

The Pharisees demanded respect from people – higher places at banquets, being greeted as Rabbis in the public, etc. Since, their focus was on creating an honourable public image by putting on appearances and amassing money, they were worshiping idols and not what they seemed to project – the love of God’s law. Jesus warns them against the danger of worshiping both God and wealth (Lk 13:16).

To these Pharisees, Jesus tells the parable of Lazarus and the rich man to show them a new era has begun. Now, in this new era, everybody is invited to the Kingdom of God – rich, poor, tax collectors, publicans, sinners, prostitutes, physically and mentally challenged, the lost and the found – provided they follow the path of the beatitudes. Pharisees were condemning Jesus for breaking the ‘law and their traditions’ for He was partying with the sinners and the tax collector. But now Jesus is showing the pharisees that it is they who, because of their love for money and status, have broken the Divine Will.

The outcome of today’s Parable is that the rich man goes to hell, but the poor man is taken to heaven. The parable does not give us any reason for this treatment. What wrong had the rich man done to deserve hell? He had done no evil; he did not steal or mistreat his slaves. He partied with his own money.  On the other hand, the poor man had not done anything good to deserve heaven. He just sat at the entrance of the rich man’s house. So why this discrimination?

Most of the time we think that all our material and spiritual blessings are our own and we have full right over them. We think that our belongings are just ours and nobody can touch them. We have all the right to deal with them according to our whims and fancies. In today’s parable, Jesus condemns this very notion from all of us and from the pharisees for whom this parable is being addressed.

The fault of the rich man is that, for him, Lazarus did not exist at all. Though he was at his door, lying down all the time because of his sores, the rich man did not raise his head to say a word. His indifference to another human person who happened to be a poor Lazarus is the main reason for his condemnation.

There are several Lazarus’ living among us, they look for our attention, support and love.