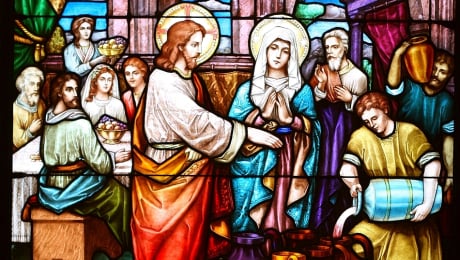 One of the most famous stories in the Bible involves a young couple that needed a rescue. They had no idea that a rescue was called for! While they enjoyed the afterglow of their wedding ceremony, Jesus was organizing a rescue party for their reception.

John does not give us the names of this couple who had just been married. The ruins of Israel have not yet shown us the exact location of tiny Cana. Therefore, that leaves us with a nameless couple from nowhere who benefited from the very first miracle of Jesus. In addition, before they knew they had a problem, Jesus had provided the solution, simply because they invited him to their wedding. The very fact that the first miracle of Christ would be given to such a couple in such a place is a wonderful point of comfort. God’s grace is available to anyone!

Jesus and Mary were in attendance at this wedding.

Bishop Barron tells couples, “You come to church to be married before God and his people when you are convinced that your marriage is not, finally, about you. That it is about God and about serving God’s purposes, a sacred calling.” The spouses then help one another to enter more deeply into a relationship with God as they strive to live out their vocation in imitation of Christ.

But there’s more than a wedding taking place here. In his account of the life, death, and resurrection of Jesus, John carefully chose only seven miracles to include in his gospel. He called each of the miracles “signs”. Starting with this water-into-wine miracle, the Bible is well on its way to inviting us to be baptized as believers in Jesus.

But it wasn’t just the couple who had a problem at the wedding. All of the people at the wedding had a problem. They had a sin problem. Little did they know that God’s grace was already among them, ready to pay for their sin on the cross. The miracle that Jesus performed was quite symbolic of what would happen in his life.

One of the great church leaders of centuries past once had a dream. Jerome, the translator of the Bible from Greek into Latin, purposefully lived in Bethlehem. One night, Jerome had a dream that Jesus visited him. In the dream, he quickly collected all of his money and offered it to Jesus as a gift.

The Lord said, “I don’t want your money.” So, Jerome rounded up all of his possessions and tried to give them to Jesus. Again, the Lord said, “I don’t want your possessions.” Jerome then recalled the moment in his dream when he turned to Christ and asked, “What can I give you? What do you want?” Jesus simply replied, “Give Me your sin, that’s what I came for. I came to take away your sin. Give Me your sin.” What an exchange of gifts—our sin, for His grace. It’s the answer to everyone’s problems.

The Cana event is also a clear statement of Mary as intercessor. Intercessory prayer proceeds from faith in God, that holy men and woman who have died are as alive today as they were on earth. Jesus ministers to us in our need! It’s all about Jesus. The mother of Jesus is the first who commands action based entirely on the word of Jesus. That’s what happens in the rosary prayer: rather than distracting from Jesus, it leads us closer to his will than we otherwise could be. St. Louis de Montfort once wrote about how Mary takes our prayers and perfects them—kind of like the way Jesus turned water into fine wine.

What concerns do we need to bring to the Lord when we pray the rosary? How can we act to help ease the concerns of others?

One last boundary is our need for transformation: Only the Holy Spirit can change one’s heart. Invite the Holy Spirit to work in your life and your families, e.g., to apologize, to admit we are wrong, to ask forgiveness, and to feel loved. The Spirit’s gifts give graces to heal, perfect and prepare the family for the eternal reality of the Wedding Feast of the Lamb.

Let me close with a story: A weasel once fell in love with a handsome young man and the goddess Aphrodite, allowed the weasel to change her shape, so that she appeared to be a beautiful woman whom any man would be glad to take as his wife. As soon as the young man laid eyes on her, he also fell in love and wanted to marry her. While the wedding feast was in progress, a mouse ran by. The bride leaped up from her richly decorated couch and began to run after the mouse, thus bringing an end to the wedding. Nature had proved stronger than Love.

The central point is that the weasel, though changed in appearance, did not change in nature or inner character.

We have new life in Christ by grace through faith and baptism. We are changed in nature and inner character, like the water into fine wine. The old is passed away and there is a whole new life and perspective in Christ.