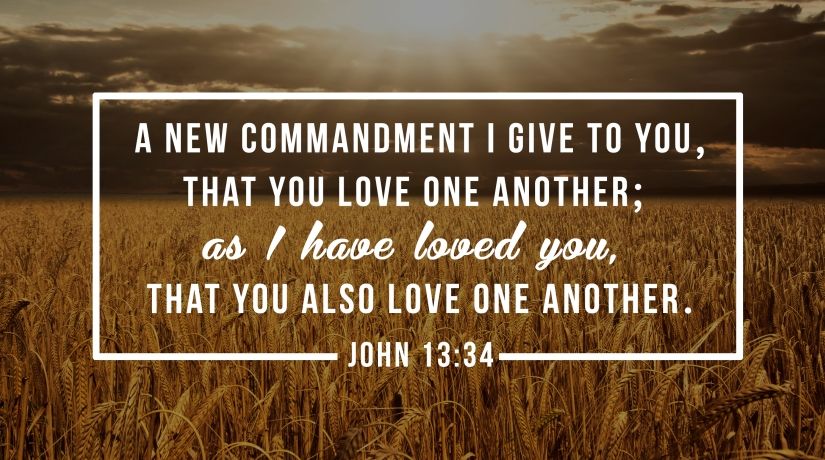 It isn’t odd that Jesus would tell his followers to love one another. What’s strange is that he told them this was his commandment. That’s a pretty strong word, “commandment.” It carries an imperative with it, leaving no room whatsoever for debate. “You will do this,” not unlike what a parent says to a child who needs to take his medicine. And that may be the way Jesus’ disciples took it, as if it were a bad-tasting medication.

Jesus doesn’t say they have to like one another. This is good because, as we all know some people are simply more likeable than others. It’s true here in this church; it’s true in my prison ministry; it’s true in your family and mine, and it was certainly so in the ranks of Jesus’ disciples. Yes, it’s a good thing Jesus didn’t tell us we have to like one another, or we might be in real trouble.

Yes, it’s a good thing that Jesus did not command his disciples to like one another. What he did was require them to love each other. Otherwise, things could have got difficult in a hurry.

The followers of Jesus did have some obvious things in common with one another. They were all Galilean Jews. That means their dialects would have been similar, their worldview about the same. From a political perspective, they might have all been of one party and shared a number of common beliefs.

But don’t stretch that idea too far. One was a zealot and another tax collector. That would have placed Simon the zealot and Matthew the tax agent on the very opposite spectrum of how they thought you were to get along (or not get along) with the hated Romans. Some were fishermen, used to hard labor on the sea, while others wouldn’t have known what it was like to have a callous on their hands. It may have been a good thing that Jesus commanded them to love one another, because otherwise this whole enterprise might have been dead in the water.

But why are we even talking about his now? It’s the fifth Sunday of Easter, and this conversation between Jesus and his disciples takes place in the upper room the night before he died. Shouldn’t this portion of John’s gospel be reserved for the Lenten season, before Easter? On this fifth Sunday of Easter, Jesus, the resurrected Christ, is now gone and in retrospect we are attempting to do what his disciples found themselves doing after Jesus was gone from them. We are looking back at what he told them… for what he said to them he is now telling us. So, if you don’t mind, I’d like to set the stage for what Jesus said by describing it as I see it.

The apostles have been arguing as to who was going to be the greatest in this coming kingdom Jesus is always talking about. Jesus’ teaching has given the disciples the definite impression that things are about to come to a head. If they had all this figured right (which we now know they definitely did not), the kingdom was about to come.

So, the major item on their personal agendas was to see what roles they would play in this kingdom. If they played their cards right, they could come out of this thing looking pretty good. Once Judas has been identified as the betrayer and is gone to do his dirty work, it is then that Jesus gives the remainder of the disciples his mandate of love.” I give you a new commandment,” he says, “that you love one another. Just as I have loved you, you also should love one another.”

Has your family ever found itself in crisis? Every family goes through difficult times. It may be the death or extreme illness of one of your family members. You might have to make a decision about what to do with mom or dad now that they’ve gotten to the point in life that they can’t take care of themselves. Every family encounters this kind of crisis sooner or later. So, what do you do? You get together and talk earnestly about what you are going to do in dealing with the struggle that has come your way. If there are other differences among you, at that point at least, you lay them aside. Your personal desires are not important when it comes to dealing appropriately with the crisis at hand.

Well, this conversation between Jesus and his disciples is family talk. It’s time for him to lay it all out for his followers and let them know what it is he expects of them. The crisis is about to come to a head.” I give you a new commandment,” he says, “that you love one another. Just as I have loved you, you also should love one another.”

And this is what I see as a result of his words. I imagine there was an incredible silence. Remember, Judas has left to go out into the darkness of betrayal. It’s almost as if the others are once again allowed to breathe. But then, when Jesus says this: “I give you a new commandment” — He’s once again taken all the oxygen out of the room, and they find themselves gasping for air.

There is nothing left but this thick, dense silence. How will they respond?

God has done everything for us; He has given everything to us. That frightful question remains today: “How will we respond?” Will we, with Peter, seek and accept the hope, promise and glory that Jesus Christ offers us all? Or will we sink in this world’s despair? Will we settle for only the glitz and glitter of this world, its thirty pieces of silver and thereby sell our souls for nothing more? The answer to these questions, along with our salvation, depends on us.